Nova Scotia has a 100-year history of using small hydro developments on our rivers to generate power. The first hydro plant was installed in 1903 by mining interests on the Liscomb River in Guysborough County.

We own and operate 33 hydroelectric plants on 17 hydro river systems across Nova Scotia, totaling 400 MW of generation capacity. Many plants have been providing clean, renewable electricity to Nova Scotians for decades, with some established in the early 1900s, undergoing maintenance and upgrades to ensure they can continue to provide reliable electricity for many years to come.

Wreck Cove is the largest hydroelectric plant in Nova Scotia with a generating capacity of 200 MW. Constructed from 1975-1978 south of the Cape Breton Highlands National Park, Wreck Cove collects drainage water from 216 square kilometres of the Cape Breton Highlands plateau to generate electricity. It’s also one of our more unique generating stations – the station’s powerhouse is located 275 metres underground, down a 620 metre access tunnel.

The Maritime Link is a 170 kilometer subsea cable connection that is being built between Cape Breton and Newfoundland and Labrador to enable the delivery of clean, reliable, renewable hydroelectricity to Nova Scotia. This will help Nova Scotia Power reach approximately 60% renewable energy in 2022, and will contribute to better long-term price stability for electricity.

Nova Scotia is home to one of just three tidal power plants in the world and the only one in North America. Our Annapolis Tidal plant came online in 1984 and has a generating capacity of 20 MW. The plant can generate roughly 80-100 megawatt hours of electricity daily, depending on the tides.

The Annapolis Tidal Station currently houses a free seasonal interpretive center that is open to the public from May - October. 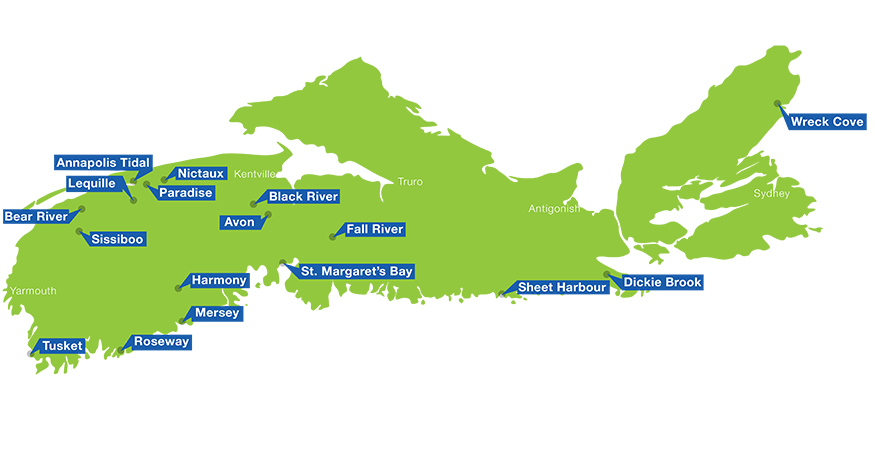