Learn about energy usage changes, payment support and safety during our ongoing response to COVID-19.

Many of our hydro facilities have been in operation for 100 years. We have a long history and ability of operating safely while respecting the environment. We continue to meet the Canadian Dam Association Safety Guidelines and operate within the requirements of our regulator. Nothing is more important than the safety of our employees and customers. As we continue to grow our use of clean energy, we are committed to maintaining our hydro facilities and the surrounding environment. Our operation of these facilities includes public and employee safety, protection of the environment and the generation of electricity.

Each hydro system is operated in accordance with a Water Approval for Storage/Withdrawal of Water under the Nova Scotia Environment Act. These approvals are renewed on a ten-year basis and we are currently in the 3rd round of relicensing.

It is important that regulators, community members and organizations, Mi’kmaw communities and organizations, the general public and any other user of the watershed are able to participate in the relicensing process and have a means to provide valuable information toward the ongoing operation of the system.

We gather and provide information to Nova Scotia Environment as part of the application to relicense a system. A report is written to give a complete picture of the previous 10 years of operation. An overview of the system includes a summary of any changes, dam safety information, and a description of compliance with regulatory requirements. Water quality studies provide an overview of a stream and reservoir sampling program. Fish and fish habitat and species of concern are also investigated. Mi’kmaq cultural heritage is recognized as an important part of the systems. Once all information is complied and reviewed, recommendations for compliance are described.

We are working to relicense several systems at this time including the Mersey Hydro System, Tusket Hydro System and Bear River Hydro System. Applications for these systems are due to be submitted June 30, 2021. Feedback is important to us so we can make informed decisions for our customers. If you have questions or want to better understand these systems, we encourage you to submit them by March 31, 2021 to allow us time to review and consider them as part of our application process. The deadline for public comment is March 31, 2021.

You can reach us with any questions or comments at hydrorelicensing@nspower.ca. 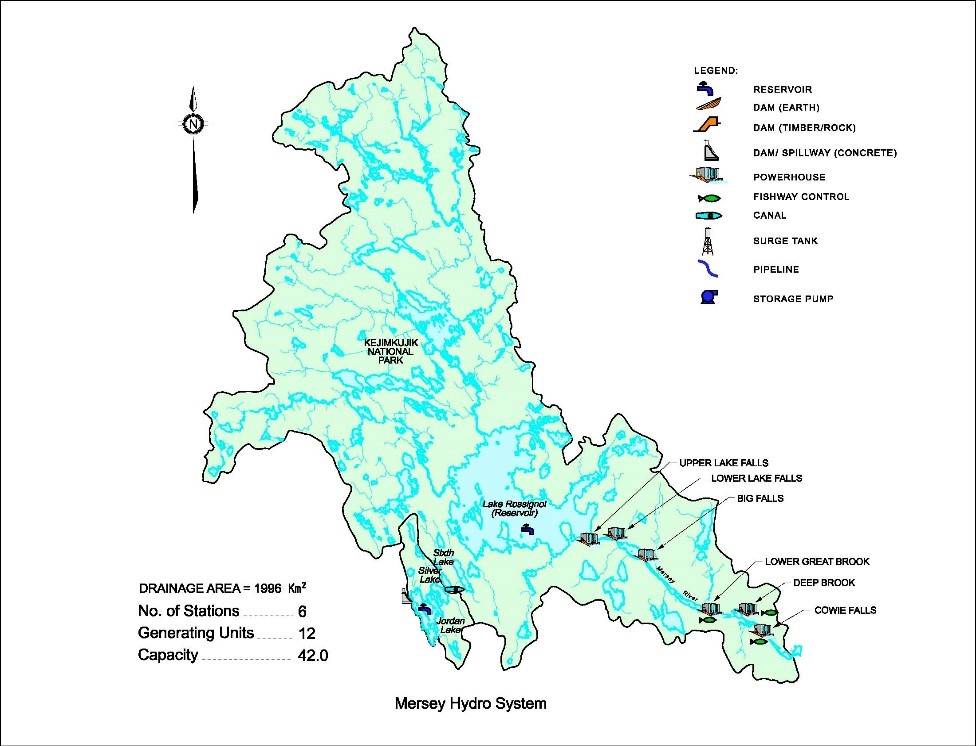 The Mersey Hydro System consists of six hydroelectric generating stations located along a twenty-one kilometer (21km) stretch of the Mersey River, located in Queens County, Nova Scotia. With a total combined capacity of 42.4MW, the Mersey Hydro System accounts for eleven percent of NS Power’s installed hydro capacity and 25% of the Province’s hydro energy generation, contributing clean, renewable energy that is reliable and dispatchable to customers as far back as 1929.

Each of the Mersey Hydro System developments is comprised of a dam(s), spillway(s) and/or sluiceway(s), an intake structure, a powerhouse, and a substation. Each powerhouse contains two generators and associated hydromechanical, electrical and mechanical equipment. The Mersey Hydro System consists of seven storage reservoirs, which provide water to the six hydroelectric generating stations.

This includes the majority of outflow from the Jordan Lake, which is diverted into Lake Rossignol through two canals.  The remaining flow is released through a free overflow concrete structure, with a valve-controlled pipe outlet for fish attraction, into Jordan River. The Mersey River has an overall drainage area of 1963.2 km2 and flows in a southeast direction into Liverpool Bay from Lake Rossignol, located in Kejimkujik National Park.

The Tusket Hydro System is located within Yarmouth County in southwestern Nova Scotia.  This hydro system has been in operation since 1929 and consists of one hydroelectric generating station and four storage reservoirs at Lake Vaughan, Raynards/Carleton Lake, Mink Lake and Great Barren Lake.

The hydro system operates by capturing runoff from the 1462 km2 drainage area. Flow from this drainage area is collected and diverted through a canal into a headpond and through a generating station. Since NSP began operations on the system, activities have been carried out in a manner consistent with NSP’s Environmental Policy. The system is operated, as all our hydro systems are, in a manner directed toward achieving a sustainable balance between the production of electricity and other competing uses and values of the resource, including the protection of the environment. 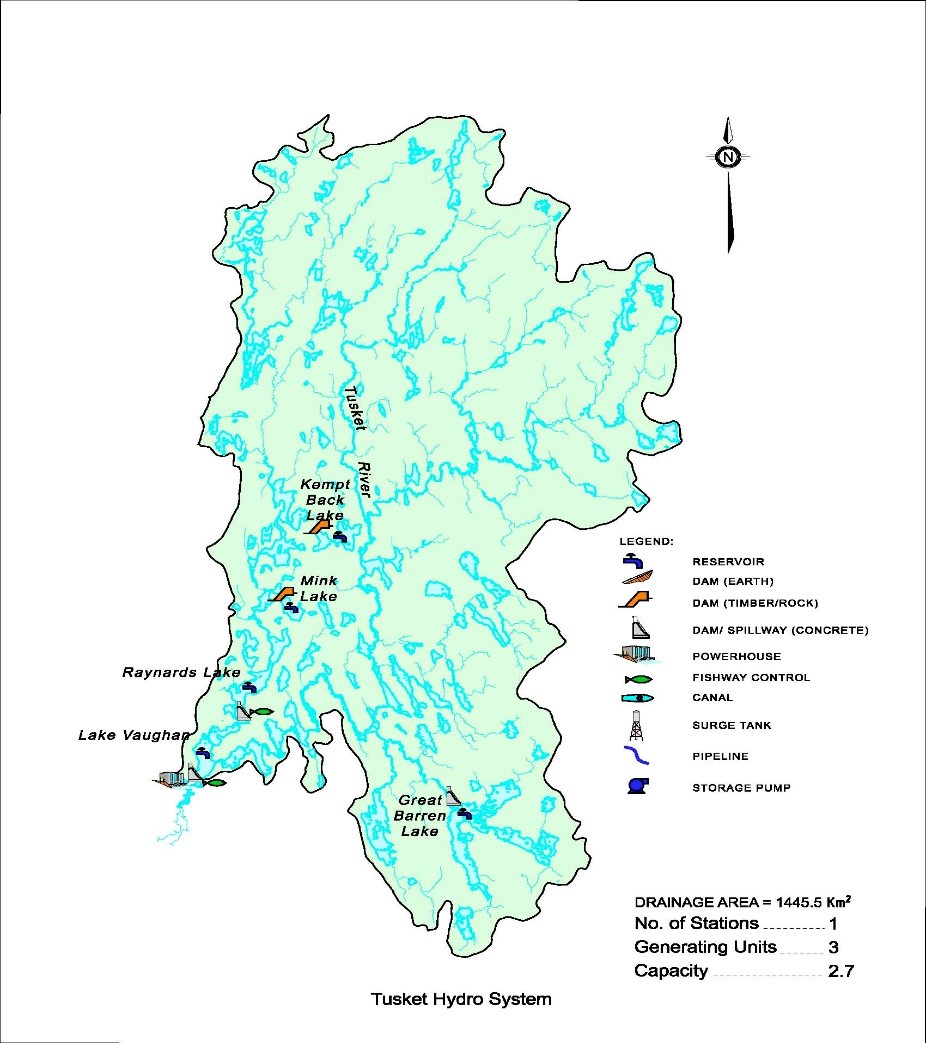 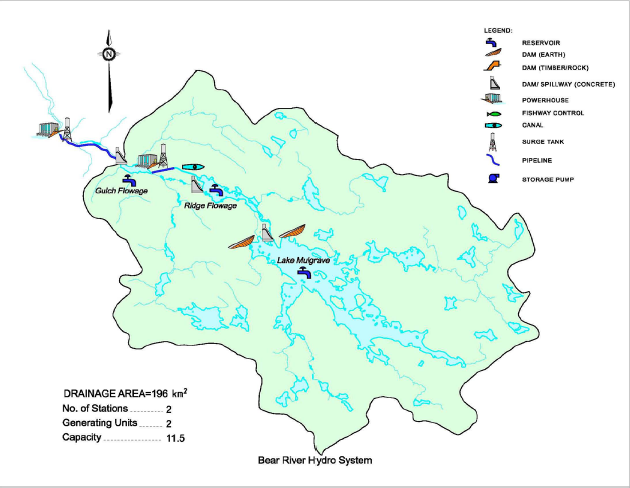