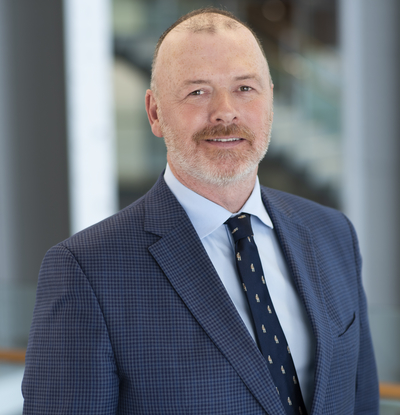 David is responsible for championing our committed focus on our customers – putting Nova Scotian families and businesses at the center of everything we do. David’s responsibilities include customer solutions, key accounts, load forecasting, analytics, as well as the fuels portfolio for all Nova Scotia Power generating stations – namely, Nova Scotia Power’s coal, natural gas, biomass, and hydroelectric plants, wind farms, imported power, and renewable energy purchased from independent producers.

Having previously worked with Aliant and the Government of Nova Scotia as a Director of Policy and Regulatory Affairs, David is well-versed in the complexities of regulatory environments. He began his legal career as an advocate at Stewart McKelvey Stirling Scales.

David earned a combined LLB and MBA from Dalhousie University and also has a Bachelor of Commerce degree from Saint Mary’s University. He was admitted as a member of the Nova Scotia Barristers’ Society in 1996.

David served two terms as a board member with the Canadian Corporate Counsel Association and is committed to advancing the practice of law through continuous professional and personal development. David is on the Board of Canadian Cancer Society (Nova Scotia Division).