Learn about the safety measures we have in place, as well as support available for our customers.

Nova Scotia Power is investing approximately $1.9 million on a project that will increase service reliability and reduce the risk of power outages for more than 600 customers on Long and Brier Islands. The project includes replacing the tower in Tiverton, on Long Island in Digby County, as well as the electrical lines that cross Petit Passage.

Nova Scotia Power has encountered an unexpected delay with the project, which is now scheduled for completion in 2020. The delay is due to heavy rains, which occurred in late June 2019 and caused erosion on the hill near the East Ferry substation, to the west of the new wooden poles. The erosion did not occur in the immediate vicinity of the project and initially, Nova Scotia Power did not believe it would impact the timeline for completion. On further examination, we discovered more evidence of soil failure and the need for a full geotechnical study and remediation. By conducting a geotechnical study, we will prevent any possibility that new poles, installed as part of the rebuild project, could be damaged through further erosion. The existing power lines, which currently provide electricity to customers, are at a safe distance from the area where erosion occurred.

Nova Scotia Power understands how important this project is to the community and its customers. The project is a priority for us, and we’ll move it to completion as soon as possible.

Once the geotechnical study is complete and has identified the work that’s required to remediate the area, Nova Scotia Power will confirm the project timelines. Specific next steps include:

The new Tiverton tower now has navigation lights installed — one light on top of the tower, and one light at the mid-point. These lights will flash red at twilight and night-time. Powered by photocells, the lights on the tower are much like the headlights on a car — they may activate during the day if there is heavy fog or cloudy skies.

Customers with questions about the project can call 902-428-6269 or e-mail questions@nspower.ca. 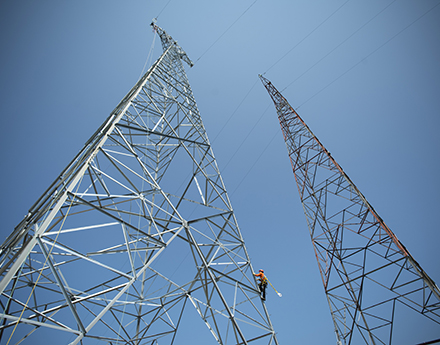